In recent days, I've been looking like a walking - or sometimes jogging - advert for wearable technology.

On one wrist I've been wearing a smart watch, the Moto 360, on the other a fitness tracker, the Nike FuelBand - plus a device which supposedly combines the best of both in one package.

That device is called the Microsoft Band, on sale in the US for some months and now coming to the UK in April. It's a very clever product with a lot of smart technology on board. It will be a lot cheaper than the Apple Watch, while doing many of the same things. But will it put Microsoft in the lead when it comes to wearables? That may depend on what matters most to potential Band buyers - utility or design.

The device is really targeted at the fitness crowd. It measures your steps, calories burned, and your heart rate, all of them displayed with a tap on the Band's rectangular screen. You can also opt to have a run, a cycle ride or a workout tracked. I tried a run, which involves switching on the Band's GPS. It struggled at first to connect, then eventually delivered a record of my run, with split times and route - and a rather unlikely average heart rate of 165.

So just how accurate is it? Well, what I liked about it was that it showed me being more active than my other devices. Halfway through my day the Band said I'd taken 6480 steps, while the Nike Fuelband had me at 5,998 and the Moto360 reading was 5,714 steps.

Who knows which one got it right - though what I've found after wearing the Nike device for a year is that what really motivates you to exercise is simply hitting an arbitrary target.

As well as fitness tracking, the Band gives you the same kind of notifications you get on a smartwatch, throbbing and buzzing when you get emails and texts or an incoming call. If you're the kind of person who urgently needs to know when another email has arrived, this could be useful. But I found that, just as with the Moto 360, knowing that I've got more email or Twitter messages did not improve my life.

What makes the Band stand out is the software, and the fact that it is a cross-platform device. Microsoft's Health app, which gives you a wealth of data from the device, is available for iOS and Android as well as Windows Phone. You can connect other apps, such as the calorie-counting myfitnesspal, to get a more rounded picture of your health and fitness. 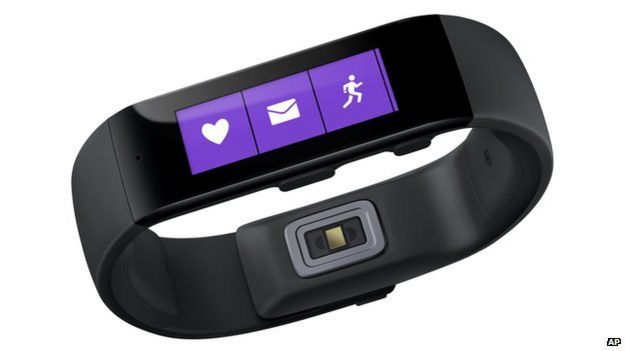 All in all, an impressive device which does quite a bit more than most of the simple fitness trackers on the market - and which competes with Apple's Watch in terms of functionality.

But will it appeal to a market beyond those people obsessed with measuring their every move?

Microsoft's achilles' heel is design - and the Band is never going to win prizes for its looks. Even the setup guide tells you that you may choose to wear the device on the inside of your wrist, as if ashamed to show it off.

I put it to Matt Barlow, who runs Microsoft's devices division, that the Band is, well, a little ugly. He laughs off my rudeness about his baby: "Compared to a chest strap or a really large GPS watch, it's elegant and rugged." But he agrees that the software and the data it will deliver, rather than the device itself, is at the heart of Microsoft's strategy. "We want to take that data and turn it into insights," he explains, "and share it with any health or wellness service that a customer would choose."

Don't expect the Band to outsell the Apple Watch, even if it is at least £130 cheaper. But Microsoft is betting that our interest in our own health will be what makes wearable technology take off - and it's determined that its software will play a key role.